Legendary DFW LPGA Class A1 golf pro and coach, Gladys Lee, has been using the game of golf to teach, inspire, and mentor youth and adults for more than three decades. 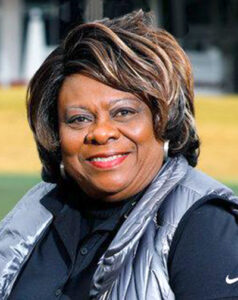 Back in 1986, Coach Lee formed a multi-cultural junior golf program now known as Dallas-based  Roaring Lambs International Golf Academy. The junior organization focuses on meeting the special needs of African American and multi-cultural, socially economic, and diverse youth aged five to 18. The organization is committed to promoting the highest caliber of children’s golf in the world, while at the same time providing constructive outlets for all children regardless of race, creed, or color.

The year-round program provides instruction and play for beginning, intermediate, and advanced level students while using golf as a means to drive home important values like self-discipline, honesty, and commitment. With so many young African Americans being diagnosed with ADHD, and practically glued to their televisions and devices, Coach Lee says her golf program not only helps with concentration, but it gives kids much-needed opportunities to gain socialization skills by engaging with other young people from various walks of life. These are just a few benefits of golf for African-American kids. Others include health, nutrition, physical fitness, and life skills training.  Of course, there’s the added perk of becoming proficient at the sport that Coach Lee has been so passionate about for so many years.

Coach Lee believes that golf can open the doors to social, business, philanthropic, and even spiritual opportunities. She has teamed up with a variety of women and men throughout the years and is still finding fresh new ways to use golf as a way to reach others. She says she has introduced thousands of African-American children to the game, including her grandson, a recent graduate of SMU.

Many alumni of the Roaring Lambs have gone on to play at the collegiate and professional levels. Coach Lee follows and supports former students in any way she can. 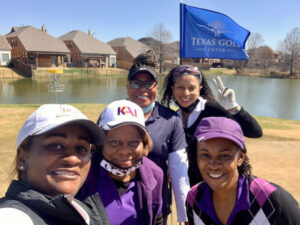 In her continuing quest to bring more diversity to the game, Coach Lee also offers training to African-American women through the DFW Fairways DIVAS & Gents, and LPG101, a six-week course where women teach other women to play. DFW Fairway DIVAS was co-founded by Coach Lee and Dr. Sheron Patterson Senior Pastor of  Hamilton Park United Methodist, Dallas in Dallas. DIVAS is an acronym for Divine Inspiring Virtuous Anointed Sisters, and Coach Lee and Dr. Patterson use Fairway DIVAS as a platform to reach, teach, and evangelize, something near and dear to both their hearts. The group receives multiple invitations to tournaments both locally and nationwide and their calendar is filling up for the year. They leave for Phoenix, Arizona for the Desert Mashie Golf Tournament in April. From there, it’s the Carol Wise “Children at Risk” Golf Scramble in May.

A self-proclaimed history buff, Coach Lee sees the importance of recognizing Juneteenth, a holiday that commemorates the day African-Americans in Texas learned they were free from enslavement, two years after President Lincoln signed the Emancipation Proclamation.  For years, African-Americans, particularly in the south have celebrated Juneteenth with picnics and the tradition of serving red soda pop, among other things.

Lee says the red-colored foods symbolized the bloodshed from the days of slavery. She says as more people learn about the significance, the more the commemoration will be embraced by all kinds of people.

There was a time when many Black people, including Coach Lee, considered golf to be an elite game, closed to certain classes and races of people. In fact, segregated country clubs and golf courses in Dallas that banned African-Americans and other people of color existed even in the 21st century. That’s changing and Coach Lee credits groups like hers and so many others in the Dallas Metroplex and across the country. Supporting each other makes us all stronger, Lee says. Whether it’s DFW’s Black Girls Swing,” or the Golf Club of Dallas owned by Pastor Tony Evans, founder of Oak Oak Cliff Bible Fellowship in Dallas, Coach Lee, armed with years of experience as a golfer, coach, and mentor, understands the importance of networking and paying it forward. Thanks to her efforts in the Dallas Metroplex, golf is open to anyone who shares a love for or just an interest in the sport. “It’s more than a game,” Coach Lee says. “It’s my life.” A life she gladly wants as many people as possible to be part of.

We honor Gladys Lee as we celebrate Texas movers and shakers during Women’s History Month!