Since 1976  the internationally known Dallas Black Dance Theatre (DBDT) has offered contemporary modern dance performances and educational programs to audiences and students throughout the metroplex.

Founder Ann Williams was determined to build a dance space where black dancers in Dallas could thrive. She received her master’s degree in dance from Texas Woman’s University and later was an assistant professor at Bishop College. While at Bishop, Williams formed the South Dallas Academy of Dance before opening Dallas Black Dance Theatre.

As the city’s oldest, continuously operating  Black professional dance company,  and the 10th largest in the nation, Dallas Black has earned its spot among DFW’s most prominent cultural institutions and has gained international acclaim, even being mentioned in the same breath as the Alvin Ailey American Dance Theater.

The company consists of 14 professional, full-time dancers, and its school, Dallas Black Dance Academy offers three levels of classes in ballet, jazz, tap, and other disciplines for students ages 4 and up.

With the goal to reach diverse communities, DBDT performs year-round and has made the transition to include both in-person to virtual performances. 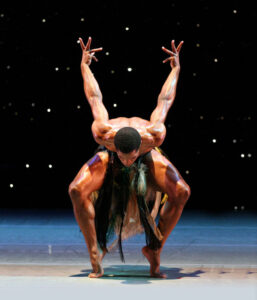 DBDT’s home on Flora St., (now Ann Williams Way) was the prior residence of the Moorland YMCA, also steeped in Black history. The facility was one of the Dallas community’s safe havens for social,  political, and civic meetings.

In fact, the Mooreland Y played a central role in the Civil Rights Movement in Dallas as one of the few places where African Americans could lodge, due to segregation.  Some of its notable guests included Muhammed Ali; legendary Chicago Cubs shortstop, Ernie Banks; and Justice Thurgood Marshall.

Moorland YMCA was named for Dr. Reverend Jesse Edward Moorland, the second secretary of the Colored Men’s Department of the YMCA in Washington D.C.  He raised millions to create YMCA buildings across the U.S. including the Dallas location.

DBDT is a current resident company at the Dee and Charles Wyly Theatre in the AT&T Performing Arts Center.

As we celebrate Black History Month, mark your calendar for a wide array of events from Dallas Black Dance Theatre and more:

A Night of Black Excellence: Songs of a Revolution Feb. 20,  2 to 4 pm?
I.M. Terrell Academy for STEM and VPA
Fort Worth